Most of the TSSF educational institutions started as Girls Vocational Schools following the spirit of Maria Hueber, aimed at preparing girls for specific profession and self-employment. In response to the needs and signs of the times, the TSSF changed the character of their institutions by admitting boys and raising them to the statues of Comprehensive Colleges.

Today, the TSSF own and run Comprehensive High Schools in Kumbo, Bamenda, Mamfe, Bafoussam Dioceses and Ngoundere Diocese in its creation process. It is our concern to respond to the educational needs of the young Cameroonians. Following the spirit of St. Francis of Assisi and Maria Hueber, we welcome and offer integral education which influences the lives of the young positively, enabling them to be self-reliant, cultivate God-fearing values and live with vision and right orientation in this contemporary society.

In all, the TSSF own and run eight Comprehensive Colleges and a Professional School within Cameroon which are;

The School of Health prepares Nursing, Midwifery and Laboratory students for professional holistic health care practice, faithful service and ethical leadership as professionals who will advance high standards of the practice in society.  Faculty create an educational experience that embraces the pursuit of wisdom and the values of caring, integrity, collegiality, and commitment as preparation for a dynamic health care environment.

This school was created in 1975 to operate as a Girl’s Vocational School. The college is located in Shisong Bui Division, in the North West Region. On March 4th 2010, it was authorized by a ministerial order to function as a Comprehensive College which is made up of the Grammar, Industrial and Commercial Departments.

Early 2003, the Jumbam’s Family advertised the School, Unity Comprehensive College, Nkar. The TSSF bought it and named it Regina Pacis Comprehensive College placed under the patronage of Our Lady Queen of Peace. The girls’ Vocational School was operating already and finally merged with REPACOL in 2007 forming one college.

In 2003, the following options were offered;

In 2006, home economics ceased to function due to dwindling numbers in that department. On 31st August, 2010, REPACOL was officially authorized to function as a comprehensive College with two cycles.

With time, the commercial and technical sections were discontinued because of the low numbers in these departments and presently only General Education is functional.

S.J.C.H.S. Mambu for the past years has been an all girls’ Catholic School, owned and run the TSSFs. It was founded in 1975 as a two-year program with the aim of giving education to young girls and women in order to prepare them for marriage. It gained official recognition at its opening in 1980 by the Ministerial decision of 8th April 1980. The creation of its High School section was autorized in 2001 by Ministerial order of 14th November, 2001.

The transformation to a Comprehensive High School effectively took place on the 25th of April, 2008, by Ministerial Order of 25th April, 2008. This transformation has widened its scope and provided a wider platform from which students are able to realize their dreams both in the Commercial, Grammar and the Industrial departments.

On the 15th of September 1997, the ministerial decree authorized the setting up of St. Maria Goretti Vocational Technical College (VOTEC) in Njinikom subdivision, Boyo Division in the North West Region.

The 16th October 2000 decree authorized it to function as a Technical College in compliance with the stipulations of the articles of the decree of 9th November 1990. In 2006/2007 academic year, boys were admitted as day students in the college.

The ministerial order of 5th June 2009, authorized the upgrading to the first and second cycles Commercial and Industrial Technical Education of VOTEC.

This college was created as a Girl’s Vocational School on the 15th of January 1974. Along the line it was closed and reopened on the 7th of September 2015 pending ministerial authorization. It is presently operating at the level of form three with the following options;

St. Therese Comprehensive College Djottin was created in March 1976 and was officially opened on the 26th of March 1982 as a Home Economic Centre. It was transformed in June 1995 from four years course in order to enrol students for the technical G.C.E. On the 10th of March 2009, it was again transformed to a comprehensive High School.

From inception till 2008, the school had the technical option (Home Economics). When it was transformed in 2009 as a Comprehensive College, it carried the following options;

On the 24th of June 2014, a decree order authorized a transformation to a Technical High School widening its scope in Technical, Commercial, Industrial and General Education.

This creation is still in process.

A RAY OF HOPE FOR POOR CHILDREN

Saint Francis Home for skill Training is a center for skills development and vocational education. This training center is opened and run by the Tertiary Sisters of Saint Francis (TSSF) since 2011. It is a Boarding/Day Centre for both Boys and Girls of ages between 12 and 18 who have completed primary education from poverty-stricken background, orphans, as well as juvenile inmates and ex-convicts. These youths are from various religious backgrounds– Fulanis, Muslims and from different Christian denominations.

AIM: SAFRAHOST will enable and empower the participants to earn their own living because it offers them a further perspective for their lives. As it includes both skill training and vocational education, it enables them to make reasonable decisions and to put them into practice, and to participate as an integral part of this society. They will also will benefit from learning official languages of the country, calculation and basic business skills.

The new aspect that has been developed for this centre is combining vocational education and skills, or better still, combining theory and practice. They teach the trades and do the practical part of it as well. Each youth specialises in a particular training skill according to their needs, talents and perspectives.

MISSION STATEMENT: In the spirit of Saint Francis of Assisi, we seek to provide underprivileged and vulnerable young girls and boys with quality skill training and vocational education in view of making them self reliant, happy and successful in life.

GOAL: To break the circles of poverty in families and society.

This centre officially started on the 31st of October 2011 with forty vulnerable youths, (twenty six boys and fourteen girls),  twenty one boarders and nineteen day trainees. 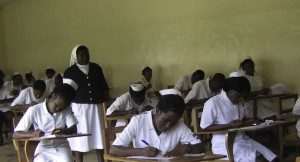 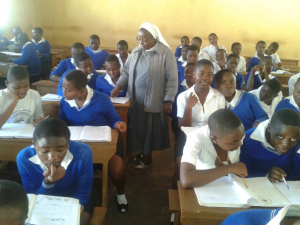