Mission statement: T o see and serve Christ in all by spending time to care

Vision: Promoting life in all its forms.

Today, the Tertiary Sisters of St. Francis offers comprehensive Healthcare in 14 locations within Cameroon. These health facilities are as follows;

St. Elizabeth’s Catholic General Hospital was started on the 15th of November 1935 as a small dispensary and maternity shortly after the arrival of the pioneer Tertiary Sisters in 1935.

The maternity and dispensary were a simple sun –dried brick house roofed with grass and had three rooms; one for the dispensary, one for deliveries and a larger one with eights beds for the maternity. Sr. Camilla Geier, the midwife was the first Matron. She started with an average of 20 consultations daily.

With the arrival of the first resident doctor, an Austrian General Practitioner, Dr. Hildegard Platzer, the dispensary was authorized as a Hospital by the Government of Cameroon on the 13th June 1952 and confirmed by the Decree of 23rd October 1974.

In 2002, a diagnostic cardiology department was created in collaboration with two Italian Associations.The inpatients of the Centre moved from the block at the General Hospital to the new site on September 29th, 2009. The centre was officially inaugurated by the Minister of Public Health on November 19th, 2009.

The Centre has a bed capacity of 79 with 91 total number of staff. 15 staff members were trained in Milan, Italy and 6 of the staff have undergone crash training in Modena and South Africa.

The Institution was begun in 1953 by the Tertiary Sisters of Saint Francis with the original purpose of maternity services with four beds. Sr. Camilla Geier, a qualified nurse/midwife later included dispensary.

The hospital presently has a bed capacity of 245, 181 members of staff, 1,200 monthly consultations and an average of 100 monthly deliveries.

Apart from all other departments as can be found in an health institution, the hospital also has a Pharmaceutical production unit.

The Tertiary Sisters of St. Francis reside in Akwa Nord, Douala since 2002. They acquired an existing structure which served as a private clinic of Dr. Jongbag. The Hospital obtained civil permission to function in December 2003.

The Health Center was raised to a Hospital by the Government Decree of 8th June 2009. As the publicity for the Hospital widened, the number of patients received has increased drastically.

This is the latest tentacle of St. Elizabeth General Hospital Shisong, opened in October 2005, and the Government granted authorization to function as a hospital in April 2006. It is under the Health District of Bamenda and Nkwen Rural Health Area serving the target Population of 13,488.

The main aim of setting the Hospital in this area is to offer the people quality and holistic health care especially in health education and environmental sanitation, of course in the spirit of evangelization.

This Health Centre was opened in 1961 and has a total number of 97 beds, 72 staff members, 450 monthly consultations and 10 average monthly deliveries.

St. Joseph’s Children and Adult Home(SAJOCAH) is the only rehabilitation centre for the congregation opened in 1976 to care for children and adults in need of special care and attention on a small scale. Today, the demand has grown so much that the centre has 153 beds, 78 staff members and 100 average monthly consultations.

The Health Centre in Wum was opened in 1981 and now has a resident doctor, 64 beds, 16 staff members, 277 average monthly consultations and 20 average monthly deliveries.

This Health Cente was opened in 1987 to attend to the medical needs of the students of St. Bedes’ College, Ashing. The Health Centre has 25 beds, 7 staff members, 283 average monthly consultations and 5 average monthly deliveries.

This Health Centre is situated in Mamfe Diocese and was opened in 1964 in an isolated village where the spirit led the Sisters. This is one of the most difficult areas we have with very bad road. The centre has a bed capacity of 54, 16 staff members, 250 average monthly consultation and 25 average monthly deliveries. 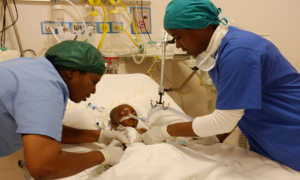 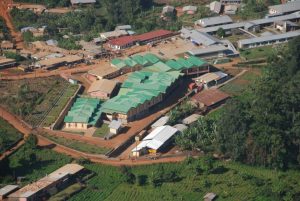